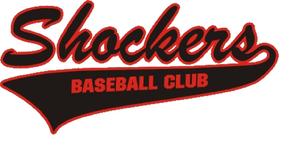 Coach Moe, owner of the Shockers, is taking 2011 off to help with En Fuego Baseball.
2010 Connie Mack State Runner Up 2010 Connie Mack Regional Qualifier
2010 Shockers Baseball Club makes it to the final game. Shockers were undefeated for the first 4 rounds. Connie Mack is done on a draw system. The system allows for byes in each of the first 4 rounds. The other rules are: you can not play a team you have already played, and if you have played every one then you must draw from the remaining teams to see who you play.

Shockers beat all the teams through the initial rounds. Since there were only teams that we had defeated we drew. Puget Sound Roxx, last years World Series Winner Babe Ruth, Shockers had won the first game 8-2. Shockers lost the draw game 8-1. That left Toyota and Roxx who had not played. Roxx defeated Toyota 4-3.

The top two teams in the Connie Mack State move on to the Connie Mack Regional here in Seattle. Teams from Northern CA, Middle CA and Southern CA, along with teams from AZ. Games will start on the 27 or 28 of July. Congratulations to the players of the Shockers Baseball Club

“I have spent the majority of my life in and around baseball, from my days playing Little League to my 16 years of Professional Baseball 13 of which were played at the Big league level, so I have been instructed and witnessed a lot methodology. I give Don Moe and his Shocker’s program the highest marks for quality of instruction and the use of cutting-edge techniques. All were delivered by great coaches and in a manner of positive reinforcement. It was a pleasure working along side Don and his staff and I would jump at the chance to do it again.”

“Who’s Going To Be Ready For Spring Time?”

Catching Camp Presented by Don Moe Jr
Former Tampa Bay Rays Associate Scout, Northern California. All team catchers no matter what level or affiliation are accepted. Fundamentals as well as advanced instruction depending on experience Ages 12 and up only please, (some exceptions made on age). Click on Catching Camp to register.

This years 18U team will made up of players from the west coast.

Private tryouts are a available upon request. In depth evaulations, honesty with players and parents.

Shockers provides comprehensive training in hitting, pitching and field play. Under the direction of former San Francisco Giants Scout, Don Moe Sr. Under the guidance of Coach Moe 97% of the Shocker Players have gone on to play college baseball. This will be Coach Moe’s 19th season.

Don Moe Sr was selected to help coach the SF Giants Scout team for the 2008, 2009 Mariners Cup. Congratulations to him on his success!

Shockers Baseball Club was founded 1992. The goal of the
club is college prep and a showcase for Professional Scouts.
Our coaches have historically come from the college level,
or professional players who are no longer playing. Shockers
Baseball Club teaches a traditional style of hard play and
hard work for success. We look for young players that have
the determination and grit to get to the next level. Shocker
players have to be willing to do what it takes to succeed.
The balance of grades, training, family is hard. The Shockers
organization expects the players to learn how to do it “all”.
The lack of management of time is the first step in failure at college.

Since 1995 97% of all Shockers have moved on to play college baseball.

Coach Don Moe Sr who has been General Manager and
Head Coach of the Shockers for 19 seasons.

The Shockers have accumulated 791 wins 215 losses and
11 ties in the 17 seasons under Coach Moe.

Coach Moe Sr, has a Certification from the National Pitching
Association as an Advance Instructor, and is also a former Associate
Scout for the San Francisco Giants. Coach Moe is the
pitching instructor for the Shockers, the 18 year ERA for
Coach Moe’s pitchers is 3.15
Don has two children and four grandchildren.

Coach Don Moe Jr. Don, 13th year Shocker Coach, will
be coaching the catchers and helping with the pitchers.
Don played at Mendocino CC and Sonoma State Division II.
Don coached at Mendocino College (catchers and pitchers).
Don’s last job in California was for the Tampa Bay Rays as an
associate scout. Don is married and has one child.

To learn more about us, click any item on our menu. If you
have comments or questions please click on the Contact Us.
Thanks for visiting and see you on the yard.